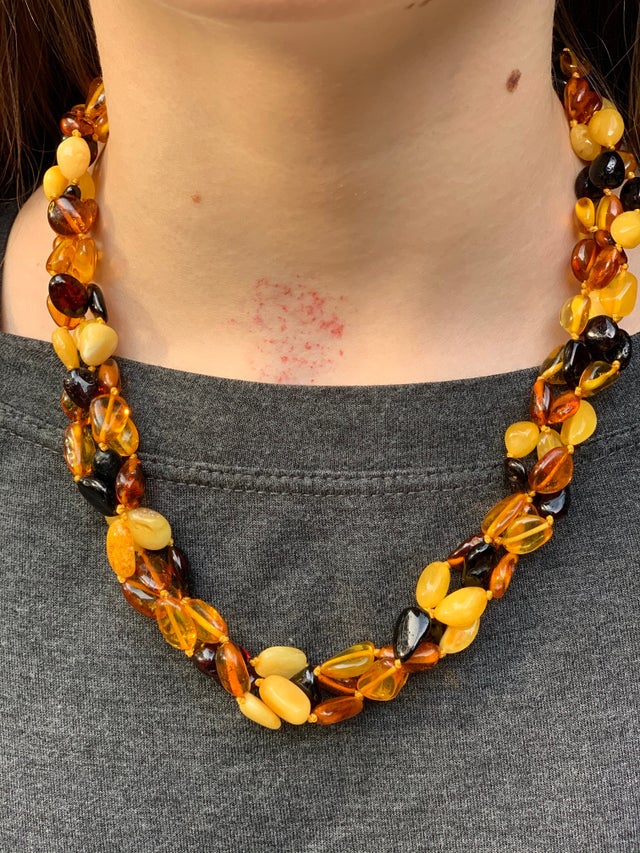 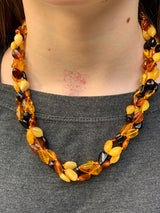 Baltic Amber is petrified sap from ancient pre-historic trees of the North and has been traded as a valued commodity by people of the North since 3000 BC. Amber is actually called “burning stone” in Swedish and German and can generate static electricity with friction thus the word “electric” comes from the Greek word for amber: electron.

In the sagas of the Norse, the tears of Freyja that fall into the sea form amber and even today, you can wander the shores of the Baltic and if you search hard enough amongst the stones and seaweed, you may find your own golden treasure.

This necklace is named for Heidr, the name that Freyja took when she left Asgård to teach magic to the "wicked women" who loved her in Mittgård. Heidr's magic is powerful, complex, light, dark and complicated like the witch who survived being burned three times in order to teach this wisdom to others. Heidr's Magic will teach and support you to weave and integrate light and dark together into a single strand.

Traditionally, amber is used in Trolldom, or Nordic folk magic, as a panacea for all "motherly" sicknesses and female complaints. From menstrual cramps to hysteria to fertility and infertility, amber has been worn by women as a protective stone of strength, protection and longevity. Polished and shiny, its reflective quality also repels evil eyes, curses or any negativity that might be directed toward an individual.

This Baltic amber necklace has asked to be specifically tasked to a witch for magical or protective work. It has been energetically cleared and anointed with midsummer Trolldom formula to activate its magical potential.

Upon receiving this necklace, you are invited to introduce yourself and negotiate a relationship with this enchanted and ancient (300 million year old) being.

Unique and one of a kind.

Add to Cart
Services  are not intended to diagnose or treat any illness, the information provided in the sessions is informational only, and is not meant to replace medical treatment or medical evaluation.